This charming teardrop shaped pendant looks so easy to do but trust me it's not!

Found the pattern on pinterest by Beadapple and even though she says herself she had tried (3 times) doing it a "simpler" way than the Original Pattern  and failed, I thought there must be a way Alma hasn't though of. It took three tries on my part too and about 4hours but at the end I did it. :)
The original pattern starts at the top and I found it a bit hard to follow but after I had one finished (undoing it two times) it was easy to start at the bottom using my existing pendant. It saved me half an hour work even if I don't count the experimenting at the beginning.

If you don't feel up to the challenge you can buy the pendant in black and gold on a long gold plated chain in my Etsy Shop. 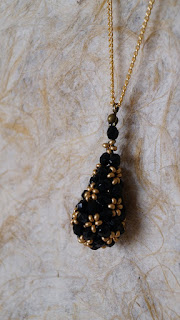